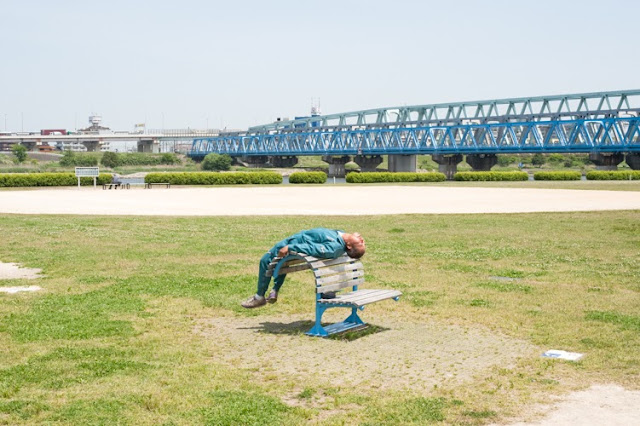 Ladies & Gentlemen, we are pleased to announce the current Wallflower exhibition by Daniel Boetker-Smith & Pierfrancesco Celada has been extended to August 2
Posted by Wallflower Photomedia Gallery at 13:34 No comments: 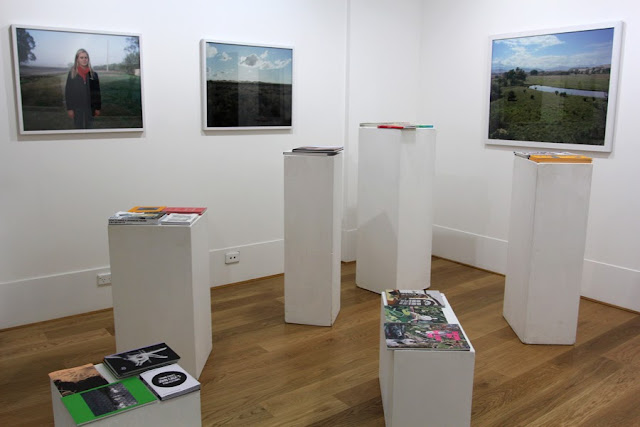 Perimeter Books is open in Mildura with a fantastic assortment of wares!

Brave the wintery chill and head down to the gallery, 41 Deakin Ave, to check out a selection of publications you'll otherwise only see online. Have a chat to Dan from Perimeter or curator Haggblom and pick up some great titles to add to, or start, your library. 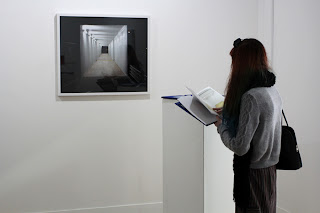 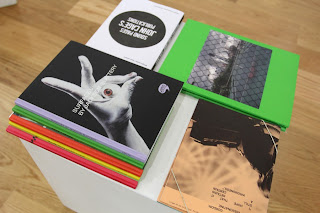 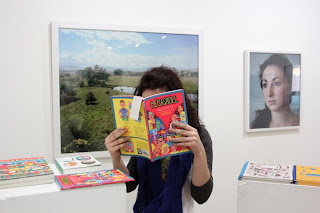 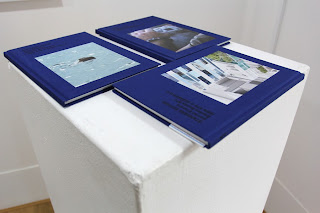 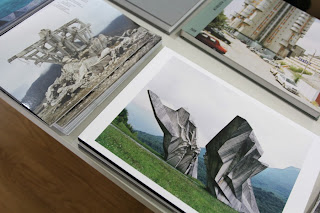 Posted by Wallflower Photomedia Gallery at 21:47 No comments: 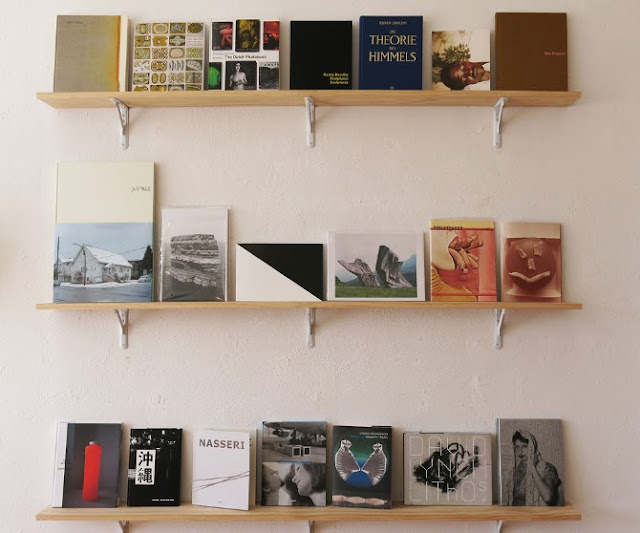 ﻿
We are crazy excited to announce that the pop-up book store, Perimeter Books, will be appearing at the Mildura Writers Festival this weekend! Opening between 10-4 both Saturday and Sunday, the shop will have a curated selection of local and international small press, art and photography, architecture and design publications not easily accessible in Mildura. 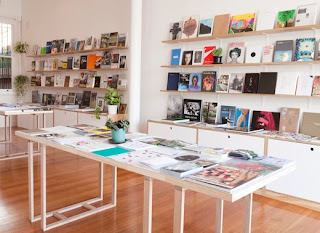 Perimeter Books, based in Melbourne, is directed by Dan Rule & Justine Ellis and launched its in-house publishing imprint Perimeter Editions in August 2012 and Perimeter Distribution in April 2013. 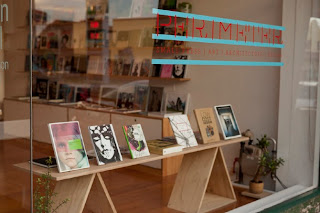 With the Mildura Writer's Festival fast approaching, we regrettably come to the end of another fantastic exhibition. So the Wallflower crew interviewed Daniel Boetker-Smith about his past, present and future for the conclusion of The Murray River Project: A Gazetteer of Digressions.


Daniel, can you tell us a little about the time you have spent in other countries? How have these travels influenced your photographic work?
I was born here in Australia, but only lived here til I was 2. Due to marriages and divorces etc I have moved around constantly since then. I’ve lived in England, Ireland, and Australia. I spent six years in my twenties wandering around North America, Canada, Alaska, South America & Australia trying to figure out what to do with my life. I’ve never really called anywhere ‘home’, which is why as a photographer I guess I am interested in those stories that don’t necessarily go from A to Z in a linear fashion but rather flit about, and move in digressive and disruptive ways.
You mention “Anastomosis” in your statement; a term referring to the branching and reconnection of the river and the links this has to storytelling and your methodology in creating the photographic image. Can you elaborate on your relationship with the Murray River and how it relates to your project?
My Dad was actually born in a town on the QLD/NSW border in what’s called the Murray Darling Basin. Ive only met him a handful of times, and we don’t really have a good relationship, though I do love him in my own way. This theme of a narrative that doesn’t get resolved, that isn’t linear, that doesn’t reach a satisfactory conclusion is one that resonates with because of my own history. I was drawn to the Murray initially because I noticed in it a resistance to the control placed upon it by all the dams and channels that have been constructed. Its natural state is one of anastomosis, where the water floods and recedes in a lacework pattern across the landscape. I think that’s a beautiful image for how stories should move, not in one direction, but just out, uncontrolled. The Murray is also so rich because of its Indigenous heritage, it is so important and so connected to the lives of the people who live and have lived along it. The river seems to have absorbed those generations of stories and I was really interested in creating a narrative where the River is allowed to be mysterious and unknowable – not just another rant about the environmental or the social but the spiritual connection the River has to storytelling - a complex, contradictory and innate one.
I saw you present your PhD research at a postgraduate seminar in Sydney last year and as with all of these events presenters were asked to stick to a strict timeframe - you went well over. Tell us about "digression" (remember this is a blog not a novel!).

Digression is perfectly summed up by Yogi Berra:  ‘when you come to a fork in the road, take it!’

There is still a fair bit of criticism towards Visual Arts and Photography postgraduate research. Personally, I do a agree that the time required takes a lot away from the actual act of photographing and other projects. As a PhD student, what are your thoughts on this?

A PhD doesn’t make any sense until you are almost finished it, it can’t make sense before that because it has to be ‘new’ territory that you are covering. If you knew what you were doing, then that would mean you’d done it before. I think each person deals with that conundrum differently. But I do have reservations about how the system of postgraduate fine art research is set up, but we have to remember that it is in its infancy here in Australia. There are plenty of models in Europe and USA which are much more open and I think we’ll see those come into action over here in the next few years.

Examples such as Takashi Homma, Christian Patterson, Yann Gross and so on, each explore a concern with the way in which photography can bear witness to the contemporary world. Is there such a thing as "new documentary" or even "new new documentary"?

I don’t know what its called but - I think photography has realised that its audience is much more savvy and intelligent than it previously gave them credit for. As a result in the last few years photographers, particularly in what has in the past been called ‘documentary’ photography, have attempted to break away from a linear and constructed form of visual storytelling and appropriated a more poetic, that is to say, experimental, form of putting together something that can engage and move an audience.

I know you have been working on a few new(ish) projects including the Asia Pacific Photobook Archive. http://photobookarchive.com/ care to elaborate on these and the future you see for them?

I launched the Asia-Pacific Photobook Archive earlier this year, it is a not-for-profit physical library of self-published and independent photobooks based in Melbourne. The archive is made up of photobooks donated by artists, editors or publishers; it features work either produced in the Asia-Pacific region, or work by photographers from an Asia-Pacific country. The APPA is an open-access archive that accepts submissions of DIY, limited edition, print-on-demand, handmade, and artist’s books. It’s a way of preserving and disseminating books that would normally be inaccessible to the general photographic audience. I can see this Archive getting out-of-control, way too big, I am looking for a space in Melbourne to house it.
My new photographic project is about the Royal Charter, a boat that sank off the coast of Wales in the UK in the 1850s with millions of pounds of gold from the Ballarat and Castlemaine goldfields. Most of it has been recovered, but there is still some down there. I was in the UK a few months ago shooting for it, and I am returning again later in the year. I find it odd that there is all this stuff (gold) taken out of the ground in country Victoria sitting on the bottom of the sea only a few metres from the coast in North Wales. It’s a series of landscapes and seascapes.

As with all our interviews, what tunes would you recommend listening to while viewing your wonder Gazetteer?
From the 90s – Portishead
From the Noughtys – Augie March
From the 20teens – James Blake
Posted by Wallflower Photomedia Gallery at 17:04 No comments: 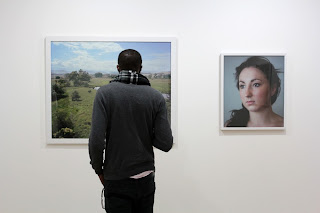 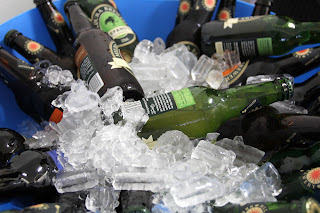 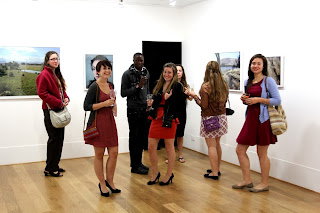 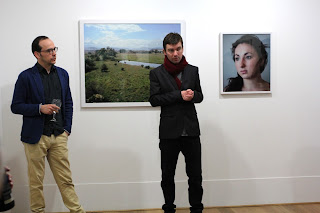 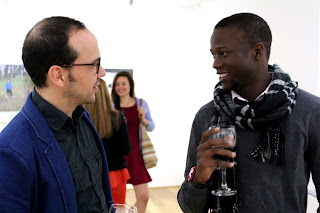 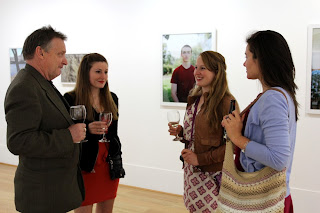 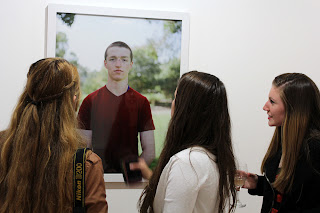 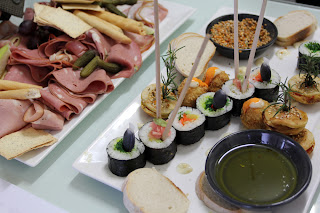 A huge thank you to Verdict Bar and Tapas Mildura for providing such a fantastic array of food for the opening of our 14th show.

Posted by Wallflower Photomedia Gallery at 16:04 No comments:

Email ThisBlogThis!Share to TwitterShare to FacebookShare to Pinterest
Video | John A Douglas

John A Douglas on abc's 7:30 report! Fantastic to see.

Body Fluid II (redux) at Performance Space last month was a performance and video installation focused around the monotony of his daily dialysis treatment as a sublime act of self transformation.

"... offering visitors an opportunity to reflect on their mortality and to experience the exhibition space as a place for healing and quiet contemplation.


The performance is flanked by figurative video landscapes, where his imaginary golden figure references the visual motifs of Nicolas Roeg’sThe Man Who Fell to Earth (1976) and elements of Russian mysticism found in the cinema of Andrej Tarkovsky.

In new work, The Visceral Garden, Douglas uses macro photography of specimens at the Museum of Human Disease UNSW for an ontological investigation of his illness that takes us on a descent into the underworld." - http://www.performancespace.com.au/2013/body-fluid-ii-redux/

Posted by Wallflower Photomedia Gallery at 13:46 No comments:

We are pleased to announce the opening of our 14th exhibition from Daniel Boetker-Smith and Pierfrancesco Celada this Friday, July 5th at 5pm.
"The Murray River Project", contains Boetker-Smith’s photographs from his three-year journey along the Murray river. It addresses not only environmental and social issues, but also unpicks the way stories flow and stagnate. Part of this work was shortlisted for the Josephine Ulrick Photography Prize 2010, the Centre for Contemporary Photography’s 2011 Documentary Award, for the Bowness Photography Prize (MGA) 2012.

"Japan, I wish I knew your name" is part of Celada’s long-term project about life in modern Megalopolis and the experience of isolation despite proximity. Celada recently won the Ideastap and Magnum Photo photographic award and the West collection purchase award.

We look forward to seeing you in the gallery!
Posted by Wallflower Photomedia Gallery at 16:20 No comments:

Posted by Wallflower Photomedia Gallery at 14:50 No comments: