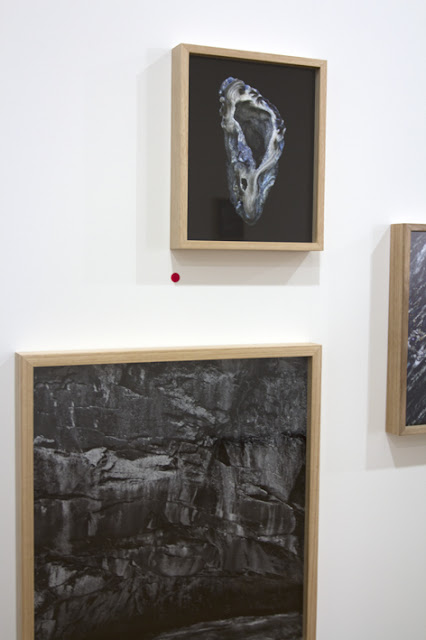 We thought we'd round out the week with some lovely news about one of the Geode works which has been sold from Ghost Notes. The piece (which is one of our assistants' favorites) is from an edition of three and was purchased earlier this week.

Visit the Gallery in the coming weeks to see this excellent work before the conclusion of the show on October 17.
Posted by Wallflower Photomedia Gallery at 18:24 No comments: 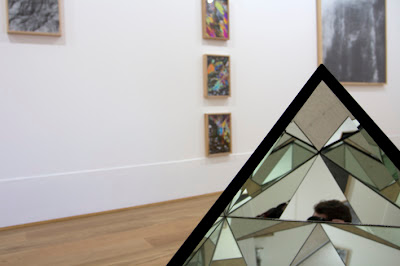 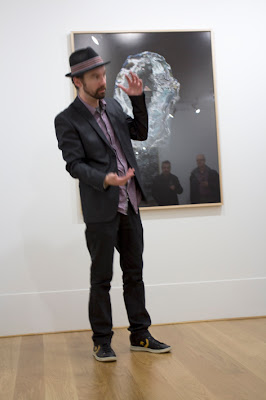 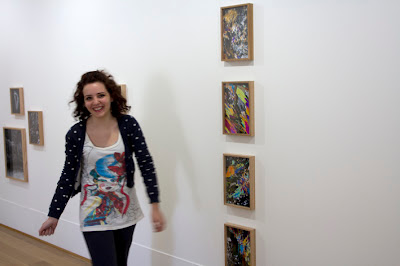 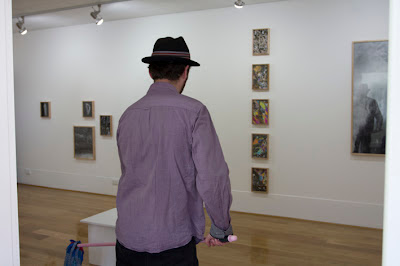 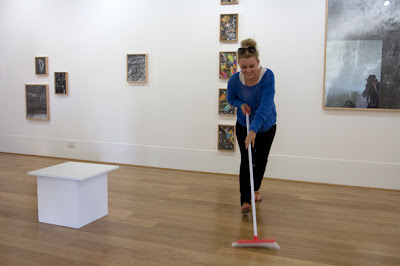 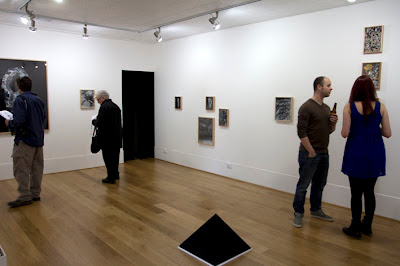 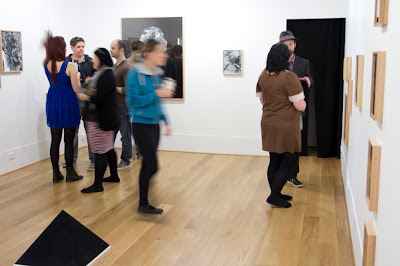 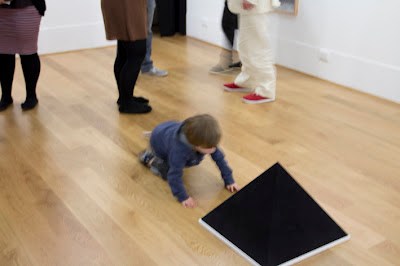 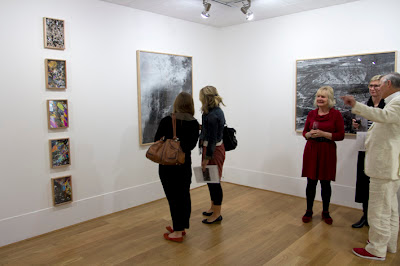 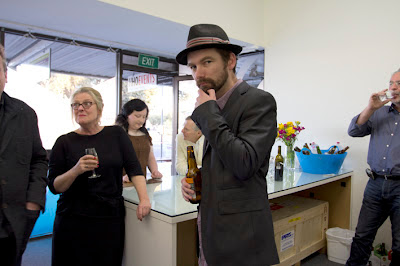 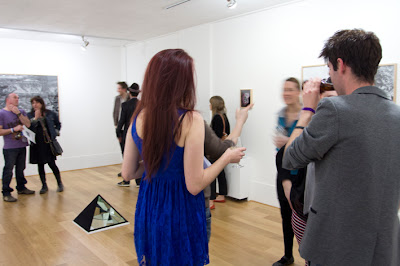 From the opening of Robert Canali's Ghost Notes with Geoffrey Pugen. Exhibition runs until October 17.

Posted by Wallflower Photomedia Gallery at 09:48 No comments:

Posted by Wallflower Photomedia Gallery at 12:04 No comments: 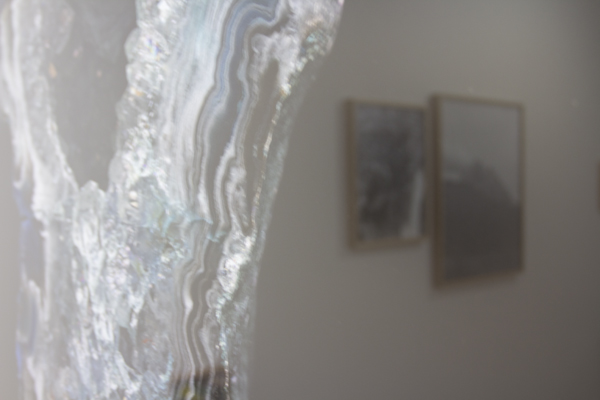 Yesterday morning the Wallflower team was excited to be installing Robert Canali's exhibition Ghost Notes in the main gallery space. With laser level, spirit level and measuring tape to hand, it was a flurry of bubble wrap and pencil marks. Although tempted, no curators were sealed in the perfectly sized, quintessential crate which contained much of the work. 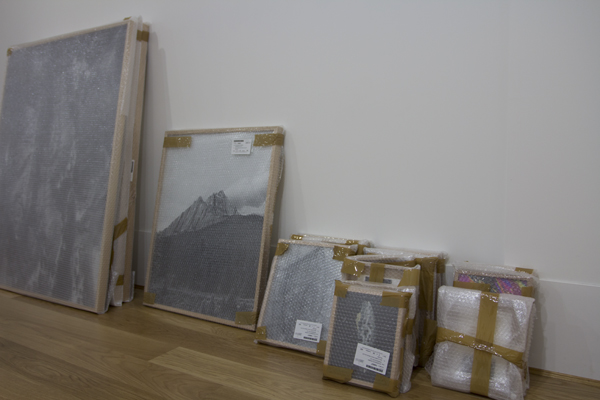 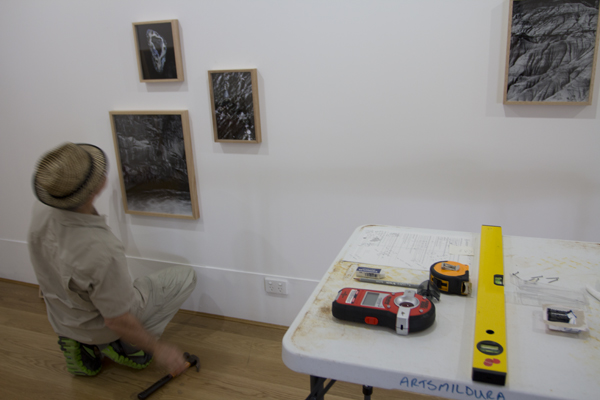 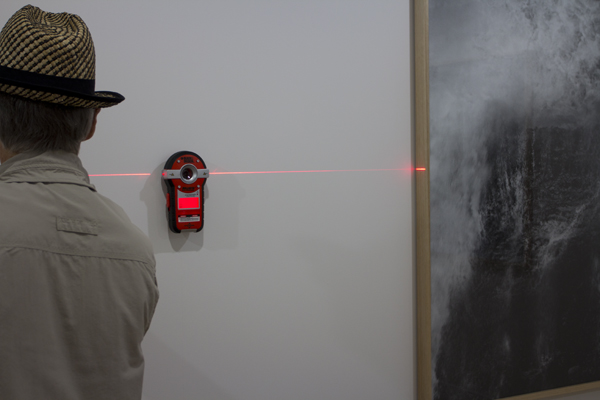 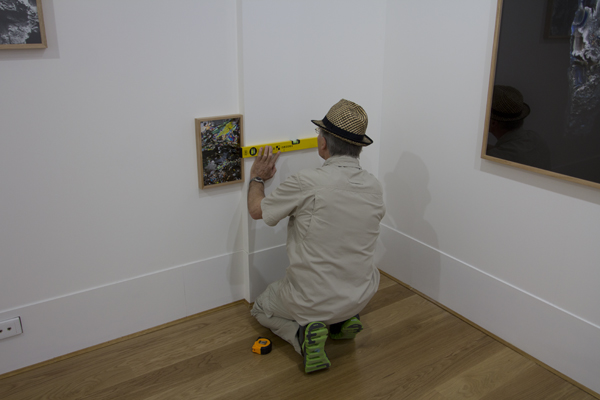 Mid-hang the media came to take some shots of the install and talk to our curator, Mr Haggblom for a television segment in the local news. 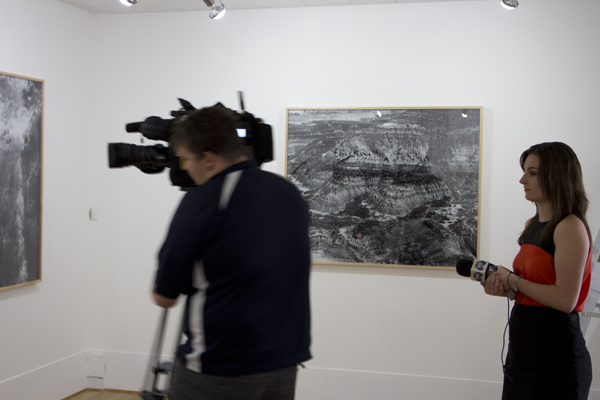 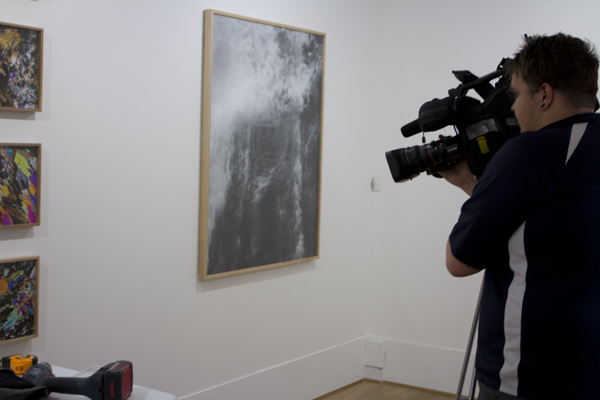 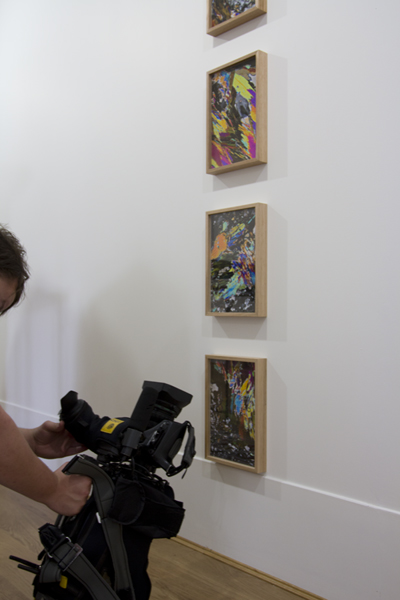 Posted by Wallflower Photomedia Gallery at 11:44 No comments: 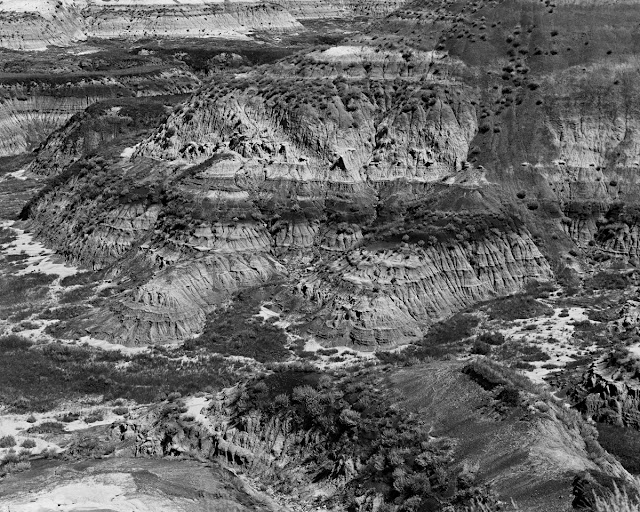 Robert Canali's work will be opening at Wallflower on Friday September 14 from 5-7pm,. As with previous shows, we asked Canali a series of questions about his work, his music, plans and the exhibition.

Mr. Canali, you make primarily photographs but also sculptures and installations. You are in a band – Grounders and have been discussing video with me. Any other outlets? And how do they all come together, if at all?
My creative pursuits are not necessarily linked by any premeditated reason or purpose, but rather represent an evolution. It always begins with an idea and from there I try to source the ideal format to facilitate that concept. For example, I came to photography as a sculptor; I only started shooting because I wanted to understand how the camera worked. It was in my research of the camera and its workings that inspired my photographic work. The same can be said for my place in the band: I one day decided I wanted to learn how to play drums, so I saved up, bought a kit, and taught myself to play. Just as I had taught myself how to use a large format camera I taught myself rudiments and rhythms on the kit. It has often been throughout the learning process that some of my most successful work is made. I find the mistakes along the way to be the most exciting moments, for it is in those instances that I can respond to what I am doing and filter a response. This can be said to describe most of my pursuits in life. I am never consciously aiming for all of my ambitions to come together in one way or another because each act, though unique, is an extension of myself.

The images featured in GHOST NOTES are all connected but the viewer may not get this at first, can you elaborate on that connection (feel free to drop some science)?

Aside from all of the work being photographic there are several links between each piece in the show. For starters the works share a certain aesthetic, one piece informs the next whether it be through colour, shape, texture or size. These formal elements ground the body of work and make it whole. In addition to the look of the work, each photograph was conceived of the same subject. The backdrop for the work is Western Canada - Banff National Park and rural Alberta. There I found landscapes that revealed themselves as sculptures. I treated the geometry of these monuments as a painter would pigment on their pallet. There isn't really a need to reference any science to describe the relationship between the subject matter in the work. Figurative or abstract, they all come from the same source, the mountains. The black and white works act as an index, suggesting a foundation or background from where the rest of the work evolved. The geodes are minerals I found while traversing these landscapes and the more abstracted images are actually macro photographs of light shining through paper-thin sections of those very minerals. The work comes full circle in a way, panning in and out on the same object, showcasing it in ways that make it seem possible for that object to be more than it is, or something it could never be. It is these possibilities that I am after in this work and in all of my work.

Your sculptural work is very photographic and it seems, in some sense, to pay homage to analogue technologies, how did it begin? Presuming it came after photography.
The sculpture you're referring to, Vessel, was created quite spontaneously. It began as most things do, with an idea and a sketch. Though it may not reflect this in its polished finish and construction, it all came together quite organically. I'm glad you sense its reference to analogue technologies, as the inspiration was definitely photography and the tools that engineer the craft. I wanted to make something seductive that spoke to the ephemeral aspects of the medium and the practice.

Can you tell us a little more about the title GHOST NOTES?

The title Ghost Notes is actually a term used in music theory to describe a note with rhythmic value but no apparent tone. This was brought to my attention while learning how to play drums. Imagine if you will, tapping lightly on the surface of a table and every so often tapping once a little harder while maintaining the same tempo. The result is a pulse that lays under the beat, a ghost in the rhythm. Similarly the work in this show accents facets of these landscapes that are embedded within them. The title is also fitting as it describes the work regardless of the term’s technical definition. Some of the imagery harkens back to a dead era of photography. With this work I strived to take what the since departed masters of black and white photography achieved, and transition it into a contemporized form using novel techniques and modern philosophies.

Like prior exhibitions in the past, I have asked you (the artist in the main space at Wallflower) to choose a video piece for the Projection Room that would work with your own project. Can you give us some thoughts on Geoffrey Pugen’s ROCK and how it relates to your photographs? Connections are obvious but it would be good to hear if you have anything to add.
What I find most captivating about Pugen’s work is the way his piece reveals the subtle nuances of a rock. In his video the surface of the mineral shimmers and reflects light as stunning little spectrums amidst a sea of black. As the camera circles, these revelations come and go, fading in and out of focus. This effect spoke to my practice, reminding me of my process while making some of the work in this show. Positioning and repositioning minerals on light tables, waiting for the perfect angle to present itself. The moment when the inanimate object came to life, boasting magnificent colour and depth.

Have you been to Death Valley?
No but I am dying to go...no pun intended.

Tell us something about the art scene in Toronto?
It may lack the rich history and vibrancy of Paris, Venice, New York or Berlin, but in its humility and youth it certainly has its own voice.

You also told me this project has come to an end – what’s next?
Allow me to rephrase that; "come to an end" sounds too definitive. Let's say I have benched this work for now to pursue more current curiosities. As of late I have moved away from the camera, as I have made most of my work about what happens inside of it. I have been experimenting with a variety of camera-less photographic techniques as well as devising some of my own. The results have been exciting so far. I can say this without giving too much away, the work does not read as photo as much as it does painting or illustration.

Any questions for us?
What music were you listening to while installing the show?

Well, I think we'll be listening to some Squarepusher, a touch of Aphex, Black Moth Super Rainbow and possibly some Autechre if the mood takes us.

Canali's show in the main exhibition space will run until October 17.

Posted by Wallflower Photomedia Gallery at 17:49 No comments:

Posted by Wallflower Photomedia Gallery at 22:04 No comments: